Mud Guts & Glory was more than just a race for some of us. It was an experience.  An experience with other racers who are passionate about what they do.  And with experiences come stories. Stories are meant to be told.  Thus, I’m breaking the centuries old adage of “What happens in Oregonia, Ohio stays in Oregonia, Ohio.”

Characters:
Holly Joy Berkey (aka @MuddyMommy and Muddy Mommy)
Amelia Boone (aka @AmeliaBoone and Race Ipsa Loquitur)
Rob Butler (aka ORTCVermont and Shale Hill Adventure Farm)
Jeff. Cain (aka @OnMyWayToSparta and On My Way To Sparta and @DrJeffCain)
Matt B. Davis (aka @MattBDavis and Matt B. Davis Runs and Obstacle Racing Media)
Heather Gannoe (aka @RunFasterMommy and Relentless Forward Commotion)
Brad Kloha (aka @Brad3CMU and Run To Remember)
Dan Krueger (aka @d13vk and Make it Happen)
Junyong Pak (aka Junyong Pak)

Introduction
Over the course of the weekend, the MGG staff brought us in, provided food and onsite lodging, and basically treated us like royalty. Each of us was blown away and so very thankful for the experience. After the race, Dhani Jones (former NFL linebacker and TV star) was gracious enough to treat us to a night out in Cincinnati and put us up in the Westin downtown. It was a complete blast (even for people like Rob Butler and me, who rarely show ourselves in public). Stories and snippets of stories emerged throughout the course of the weekend. Those snippets, stories, and hints of stories need to be let loose. This is an unconventional post. Follow along. If you get lost, it’s okay, because for some of it, you just had to be there.

The memories and snippets of stories you may not have heard…….
Clearly, the biggest rivalry of the weekend was not on the course, but was the verbal battle between Dan and Matt B. Davis.

During the course preview, I may have come close to being dis-invited to race when my first (and highly unsuccessful attempt) at the Sternum Checker obstacle left me scraped, bruised, and sitting on my butt in the dirt.

The inspirational talk by Brad Cousino of King’s Domain moved each of us to a new respect for what this race really represented.  We were there for a reason other than racing.

The cameras and paparazzi at the starting line startled me.  People are usually telling me to get out of pictures, not in them.

At the quarter mile mark, I set my sights on Amelia and sprinted down a hill after her.  I edged in front after a ditch jump and shouted for the world to hear.  “I’m beating Amelia!  I’m beating Amelia!”  Then she passed me.

Then there was Dan asking every volunteer how long until the first water station…beginning approximately 50 yards AFTER we passed the first one.

Yes, there was photo bombing.  Boom!

That one time AFTER the race, when Amelia tripped and fell down the hill.

Fashion Cincinnati writes that obstacle racing gear is trending at the top clubs in the downtown district.  It is reported that Dhani Jones invited 8 obstacle racers out on the town and all they had to wear was racing attire.  Injinji knee high compression socks are now the rage.

While standing in the rain trying to find our way to the restaurant, the sudden realization that none of us should ever enter an orienteering race.

When Pak jumped out from a corner in downtown Cincinnati yelling “Give me all your money!” at Matt B. Davis.

Matt B. Davis impressing Dhani Jones with his lower body “skillz” at the restaurant.  GoDaddy.com was immediately besieged to check the price of a new domain name.  Let’s just say that MattBDavis does more than run.

Brad Kloha might not be single if he would stop running long enough for a girl to catch him. Keep running, Brad! As fast as you can!

The girls drank boots of beer (really).  Then this happened.

Rob Butler attempts to jump monkey-bar style from one scaffold to the next in downtown Cincinnati.

So closes the book on a weekend of bonding and new OCR friendships!  That is unless someone else wants to share the stories that I didn’t……….(hint, hint) #MGG #BeautifulAgony 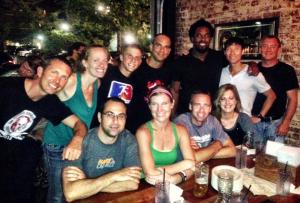 2 thoughts on “Mud Guts and Stories”