The 2013 Vermont Spartan Beast was designed to break.  To break bodies.  To break spirits. And, in the case of the final sandbag march back up the mountain, to break morale.  With undoubtedly the most talented pool of athletes to ever grace the starting line of an obstacle course, this Spartan World Championship would not come easy.  Marathon winners, Olympic athletes, and Spartan elites were among the many casualties of the weekend.  DNF’s were stamped by the names of some of the toughest competitors in OCR and other sports.

As the stories continue to unfold, the big picture is evolving as almost a game of “last man standing”.  Described by many as having a Death Race “feel” to it, finishers had to overcome numerous physical challenges and fight their own mental battle.  Ridiculous.  Brutal.  Torturistic.  Horrible.  Stupid.  Those were all terms that I have heard used to describe the race.  I spoke with more than a hundred people on the course, after the race, the next day, at the inn, at the airport, on the plane and the lasting impression of this race is mixed.  Opinions were freely shared and ranged from “this was an incredibly challenging venue” to “I have lost the desire to run another Spartan Race”.  “The mountain beat me this year, but I’ll be back next year” and “If this is what Spartan Races have become, then I won’t be back” were two opposing viewpoints I heard over and over and over again.  Newcomers and elites were not in separate camps on this.  Some saw this race as the ultimate challenge.  Others were dissatisfied with the seemingly new direction of Spartan races designed to induce DNFs. There is a very fine line between the two and many feel that the line has been crossed.  [Note: I really didn’t want to write that, but that attitude was so prevalent that I felt I needed to include it].  To be fair to Spartan Race, this is the Vermont Beast.  A race like no other and the one I have always touted as the race of races.  Be prepared for worse than what you expect….like thousands upon thousands upon thousands of feet of elevation gain and carrying heavy stuff a good piece of that distance.  Then be prepared for something even worse than that. 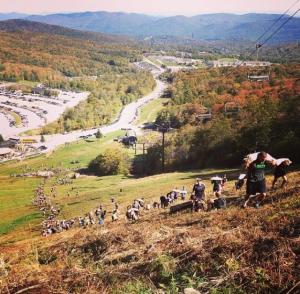 My review is not about the obstacles or the terrain.  You can find them elsewhere.  However, let me just give you this photo (credit Dan Krueger) of the 60 pound sand bag carry straight up the ski slope for a half mile and then back down again.  To me that photo alone exemplified this race.

Every review of this race that you read/hear will be slightly different.  For me personally, I don’t even know how to rate this race.  It was such a different experience for me for reasons described below.  Saying I had a bad race is actually a positive. It was nearly a disaster that would have left me with real psychological issues to deal with.  Instead, I can remember it as a unique example of overcoming obstacles (see what I did there?).  So what happened?  Welllll….. I slipped and smashed my back on a rock (2 big gashes and bruises).  Slipped and smashed my elbow on a rock (another gash and bruise).  Worst of all, I strained my left hamstring early in the race (which really screwed me!).  You cannot do well in this race with a weakened and vulnerable hamstring.  Overcompensation then sent my right IT Band digging into my knee less than halfway through the race.  Fear of being out of training for another 6 months crept in.  The injuries I had nursed all year threatened to take over, forcing me to dial back even further and limp my way through.  Calves cramped on the first rope climb.  Coming out of the first swim and right before the horizontal traverse, my hamstrings cramped. While trying to work through that, my quads and calves locked solid.  I fell to the ground groaning in agony as two other racers beside me welcomed me to their club.  Winds picked up and I started shaking.  A few minutes later, I stupidly attempted the traverse wall and fell off quickly as my hamstrings cramped again and the shivering ramped up.  Hypothermia started to set in.  It was during the 30 penalty burpees that the thought crossed my mind that I might not finish  That had never happened before.  Not during the first Vermont Beast.  Not during the Ultra Beast.    My attitude toward the race was fine, but my body was saying.  “You’re not going anywhere, Buddy, so don’t even try”.  At this point I was shaking uncontrollably with no good way to get warm.  I just knew a medic was going to see me and try to pull me from the race, so I found a sunny spot surrounded by weeds and threw myself on the ground.  The shivering continued, but the cramps finally subsided as my body said “Go on if you must, Idiot!”. 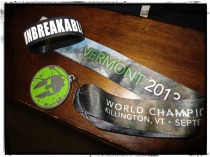 When the hamstring and knee injuries started, the race became one of survival.  When I lost all my nutrition during a barbed wire crawl and went the last 5 or 6 miles on nothing, it was all about forward progress.  My stomach was telling me “Okay, Hotshot, since you won’t give me any food, I’m just going to eat your innards!”  I ignored it and went on.  When the hamstring completely gave way 7 feet from the end of the tyrolean traverse, I did my 30 burpees.  And because of the elite competition rules, I had to at least touch the obstacle, swim across the lake and do 30 more burpees and then repeat that yet again.  I struggled through the 90 burpees and kept on going.  Not fast mind you, but I went, dragging my strained hamstring along with me.  And I finished.  I had completely relinquished the competition with others and embraced the competition with myself.  I don’t know what place I finished.  I don’t know my time.  I don’t want to know.  The mountain battered me, but didn’t break me.  On this day (and this day only) that was a win.

Below are some other reviews of the 2013 Vermont Spartan Beast that I have seen thus far: