Thanks to Friday night rains, what once was a hard-packed trail primed for speed across the quick up and downs of Haspin Acres, turned into a sticky clay mud skating rink.  From the opening gun to the last fire jump, this was the slipperiest 4.9 miles I have ever experienced.  Traction was at a premium and even the best OCR shoes were unable to provide a stable and consistent run, as almost every footfall was subject to a slide.  Based on post-race discussions, most of us were afforded the opportunity to do more burpees than usual as the rain and mud made their way on to grip-based obstacles.  Rain happens though, and the event was still really good despite the absence of stretches where pure speed could be unleashed.

After the race, I stood in the festival area gazing around at all the activities, the Spartan merchandise tent, and the variety of food and beverage choices.  I couldn’t help but think how vastly different this 4th Indiana Spartan Sprint experience was as compared to the original, raw-boned 2012 race that was pulled together out of sheer grit and determination of a couple of my early OCR friends. This year it was much more polished, even though that polish contained a mud tint.

After a long Spartan Race layoff of several months, I was anxious to see the new and improved obstacles.  This is what stood out to me.  The Z-traverse wall, the sled pull, the rig, and the tarzan swing. all added variety and a new level of difficulty  The Herculean hoist was considerably improved in the fairness aspect, due in part to the standardization with sandbags.  Those of lighter weight were not automatically doomed to burpees just because of the law of physics.  The biggest moans of the day had to be the bucket carry, which spanned a few hundred yards up and down a muddy track.  Lack of knowledge on how to best carry the buckets made the struggle worse for many.  More than a few people had to start over when they fell victim to a misplaced step, spilling their sand and gravel.  This was also my first spear throw with the umbilical cord to the fence.  I honestly did not like the idea and wasn’t looking forward to it, but it wasn’t bad at all…..perhaps because it was a shorter distance than years past??? 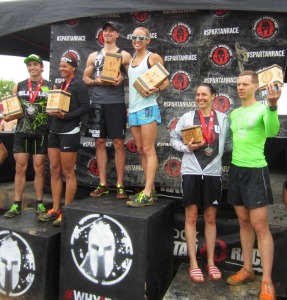 I will also give Spartan credit for improving their Kids Race.  Rather than a hundred kids taking off at once, they went out in much smaller waves of about 20 every couple of minutes.  That prevented the kids from running all over each other like ants, and it made it much easier for parents to get good photos.

I’m home now treating my scrapes and cuts and one nasty rope burn from the tarzan swing, but my mind is back on Spartan and moving myself back nearer to the front of the competition.  The layoff was good to me.  Congrats to my friends, Brakken Kraker, Amelia Boone, and Chris Schapman for their podium finishes.  Well-deserved!