Disclaimer: The following article is for entertainment purposes only.

This will not be a big surprise, but guys oftentimes find themselves in sports discussions that are too dumb to measure.  This could very well fall into that category.  It’s the type of discussion that I envision would happen if I hung out more with the guys from BROCR Media.

With that I give you my comparisons.  Are there flaws to my logic? Probably.  But I watched a lot of wrestling back in the day and I’ve spent a lot of time around obstacle racing, so I think I can make a good case.

This is not too much of a stretch. Hogan vaulted professional wrestling into the limelight and Hobie was the first OCR superstar who, like his wrestling counterpart, inspired scores of others.  Hogan ate his Wheaties.  Hobie ate Wheatgrass.

Wild abandon.  Big biceps.  Often accused of being on the side of crazy.  Enough said. 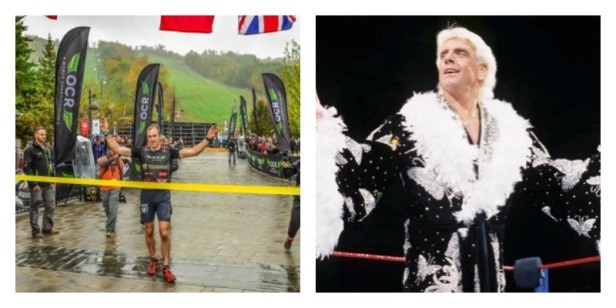 “If you want to be the man, you have to beat the man!” Winner of all 4 OCR World Championships makes him the man in that arena.

I struggled with this one.  Is it Bill Goldberg? Is it Superstar Bill Dundee? Is it Ravishing Ric Rude? I finally landed on Mr. Perfect because…well, because Ryan appears to live the  life that other obstacle racers dream of.

Just like professional wrestling, I had to throw in a surprise twist at the end.  Yancy could be the Jimmy Hart of OCR.  Not in the bad ways, but in the good ways.  “The mouth of the south” Jimmy Hart never stopped talking and Yancy can talk for days on end! He just makes more sense. Just like Hart, as a trainer and coach, Yancy stands behind a boatload of OCR champions.

In honor of stupid discussions everywhere, this one can’t die.  Do you agree with my comparisons? Have some additions?  Some revisions?