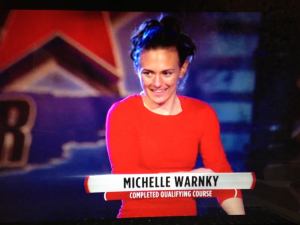 The smile that greeted me at our first introduction was the same smile that greeted America at the top of the American Ninja Warrior warped wall.  Although Michelle Warnky has garnered national acclaim as one of America’s top ninjas, that smile tells a story beyond what is seen on television. The little girl who wanted to be a missionary grew up to make her mark in a sport that was non-existent just a few years ago.  Those who knew Michelle when she was running track and cross country at University of the Cumberlands describe her as “high-energy happy.”   Michelle is a brilliant sparkle in the sometimes dark world of sports, in which too many athletes become self-absorbed and hide behind a mask of competition.  Despite her success, Michelle does not exhibit an air of pridefulness, but exudes gratitude toward all those who come in contact with her…..not surprising from someone who willingly spent 5 school years of her life in Kazakhstan teaching English with a Christian organization.

Aside from her smile and pleasant personality, the thing I remember most about our first encounter was magic marker writing on her leg that read: “2 Corinthians 12:9.”  This aptly chosen bible verse (“My power is made perfect in weakness“) was not only a symbol of her deep faith, but a fitting theme for her at this particular event.  After spending 5-6 months not being able to run due to overuse injuries after last year’s World’s Toughest Mudder, Michelle accepted a free transfer entry from a friend for the May 2014 Mud Guts & Glory event.  She had no intentions of racing until she was back in running shape, but she put her doubts aside, tapped into her indomitable will, and eventually emerged as a legitimate OCR contender by finishing second only to the world’s greatest female obstacle racer, Amelia Boone.  She had the attention of those in attendance and now the OCR world started taking notice.  Unlike most of the top female obstacle racers, Michelle does not have a wealth of OCR experience, something that she notes as a current weakness.  Along with the aforementioned World’s Toughest Mudder, she has only competed in a few other events and has yet to compete in a Spartan Race.  Also, even with 10 years of competitive running in her background, that has not been her emphasis of late and she wants to get her running legs back (although based on her performance at MGG, you wouldn’t realize that she still has tremendous upside).  What she does have going for her though, is that obstacles in general are something that she relishes.  When I asked what her favorite obstacle was, it didn’t surprise me when she said “the weaver wall at Mud Guts & Glory.”

A typical day for Michelle is never typical.  She deftly juggles a variety of professional, athletic, and personal responsibilities.  Each day is different for her, but you can be assured that most involve some type of training; be it rock-climbing, running, or obstacles.  You can also bet that she is touching people’s lives each day whether through hosting ninja events, training future ninjas, designing a permanent obstacle-training space for event purposes, personal training, corresponding to all the communications through email and social media, or speaking to church groups or at other community events.  Oh yeah, she also stays busy just by being one of the most popular and well-respected Ninjas!

Where will we see Michelle next in the OCR world?  She just signed up for the Ohio Spartan Super and then she will be back in Oregonia, OH, where she’ll be competing at the OCR World Championships with the Obstacle Racing Media’s female team.  If you’re there, just hope that you’re fortunate enough to meet this delightful competitor.  There is lots more to come from her.