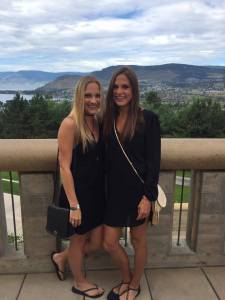 Dressed in jeans and a jacket vest, Faye Stenning looked like your everyday twenty-something with an attractive smile and glittering eyes. You know the kind.  One of those peppy girls fresh out of college who will spend an entire weekend shopping for shoes that she thinks will make her the envy of all the other females. One of the girls who watches every episode of the Bachelor and the Bachelorette and is fluent in TV pop culture.  But this girl I spent 30 minutes talking to on the side of a cobblestone street in Blue Mountain, Canada on the Friday of the OCR World Championships is far from that type of girl.  Sure, she dresses up and spends the occasional weekend night out with girlfriends; laughing, drinking, and enjoying her youth. Yet underneath that youthful innocence is a tiger of a competitor who embraces the rugged dirtiness of elite obstacle course racing. Lindsay Webster, who dominated the female OCR scene this year, personified Faye in two sentences.  “She’s a very dedicated and driven athlete, which pushes me to train and race harder. She’s also a great friend and fun person.“

As with most of the current cadreof top-ranked OCR athletes, Faye entered the sport with a decorated running background.  Nicknamed “Tigger” by her dad because of boundless hyperactivity, Faye needed running to calm her down and keep her out of trouble. She eventually found herself running track and cross country for the University of Calgary. Her entry into the OCR scene was a little different from the familiar mantra: “one race and I was hooked.”  Her boyfriend talked her into running a local obstacle race with him and she beat the nearest competitor by 20 minutes.  LAME was Faye’s impression of the sport, but she entered a few more simply for the sake of spending weekend time together.  One of those next races just happened to be a Spartan Race.  Once she had tasted the difficulty and the competition, her opinions changed.  She was challenged and that was all she needed.

“The funnest sport ever!” she told me with wide eyes that sparkled with excitement. She then described the contrast of her track experience in which after the race, everyone closed out the world with earbuds and retreated individually to hotel rooms.  But we all know that OCR is different and provides the social fix that so many her age chase after in bars and nightclubs.  It is the friendly nature of the sport that she feels (as do I) that helps prevent burnout.  The races themselves are not the “end all be all” for Faye. As Lindsay told me “We dueled it out all season on the race courses last year, and when it came down to our sprint finish at Spartan World Championships where we finished under a second apart, we were able to laugh and hug it out together at the finish line – something I feel like a lot of athletes who spent all season racing as rivals wouldn’t be able to do. It just goes to show what a great person she is as well as racer.”

If you wonder who Faye admires on the OCR circuit, she quickly pointed to Rose Wetzel-Sinnett.  Faye loves her perky, happy attitude (who doesn’t!) and is particularly amazed that she competes at the highest levels in a variety of event types from track to sprints to beasts to American Ninja Warrior.

It’s difficult to describe someone who has the face of a fawn, but the claws of a tiger.  The danger lies in misrepresenting her by painting a picture too far to either side.  Either way, she will make a strong impression.  Perhaps that is why Faye is one of the darlings of BROCR. To quote Bill Brumbach “She’s one of my favorite people!”  [despite the fact that she scares him a little].