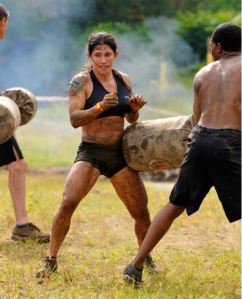 This interview is one of a series with 5 different Beachbody Coaches (fitness enthusiasts authorized to sell products like P90x, Insanity, Asylum, etc.).  Enjoy their stories!

What did I know about Heather Powell before this interview?  She likes to RAWR! A lot!  Like she is almost constantly RAWRing! Now, on to the interview.

Why did you become a Beachbody coach?
I originally became a coach for the discount on product and programs.  My BB journey started in 2005 when my chiropractor told me “no more floor crunches”.  I was devastated.  That weekend I went on a trip and was flipping through infomercials at midnight in my hotel room and who came across the screen?!  Shaun T with his Hip Hop Abs.  I was saved!  I ordered from the hotel room and it showed up 2 days later at home.  I was hooked.  I progressed through Turbo Jam, Chalean Extreme, Insanity, P90X, Asylum, P90X2, Body Beast, and Asylum 2.

How/why did you become an obstacle racer?
As for obstacle racing, my first endeavor was in April 2012 at the PA Tough Mudder.  Two girls from the roller derby team I had been on mentioned doing it.  I signed up and was hooked after I ran through the first mud puddle!  I was added to the N-Motion FB page by my cousin right before that race and I posted pics from it.  I was immediately egged on to try a Spartan Race.  I figured, why not.  PA at Blue Mountain was my first Spartan and I raced under AZN Armour.  Jason Moss informed me after that race, he expected me to sign up for the Elite heat going forward. I went on to run NJ and VT last year as well.  At the end of the year, I thought, ok, I got my trifecta, I’m done: Spartan races, been there, done that….then the standings were posted (I’d been ranked 33rd!) and I had earned a Season Pass…..hello 2013!

If you could recommend only one Beachbody program for fitness training, what would it be?
If I could only have one program in my arsenal, it would be P90X.  It covers strength, cardio, and flexibility….and NO skipping Yoga! Key components to a healthy lifestyle.

What is your best OCR memory?
Although I made podium in Georgia recently, I have to say my best OCR memory has to be the VT race at Killington.  Not only was it the hardest thing I had ever accomplished, I did it side by side with Jason Moss.  Within the first mile there were muddy, water filled trenches to wade through and climb out of.  I slipped and banged my left leg pretty hard.  I regrouped and we continued on our way.  By mile 3 we were on a downhill, running through the trees and I felt a jarring pain through my left knee.  My first reaction, anger.  My second reaction, fear (of not finishing).  My third, determination (I WAS going to finish).  Jason took one look at the determination on my face and quietly took his shoe and sock off.  He had had his foot wrapped, from a previous injury.  I started to argue with him and he looked at me and said, “do you want to finish?”.  I let him wrap my leg and together we finished the last 11.5 miles of Hell.  It took over 6 hours and 20 minutes, but I got my medal and rounded out my first trifecta.  As we walked to the car afterward, we got to the base of just a small hill (the car was at the top).  We broke down in fits of laughter at the seemed impossibility of such a little fete when just behind us was the formidable Killington MT we had just conquered.  Hobbled, we did, up that hill.

Least favorite obstacle?
Now my least favorite, and I’m sure I have a few friends here, is the spear throw.  I don’t own a spear to practice with (though I’m working on it).

Would you rather do an OCR in 80 degrees or 30 degrees?
I’ve raced hot and cold and I will vote for 80 degree weather every day of the week.

Yoga: yes or no?
NO skipping Yoga!

Favorite Beachbody trainer?
Shaun T is my favorite trainer.  I had the opportunity to participate in his massive group workout at last year’s Summit and it was awesome!

Tony Horton: mute him or enjoy his banter?
Tony rubs some people the wrong way, and I’ll admit, after the 100th “pterodactyl, backing out of trouble”, I’m ready to mute him, but the program is effective.

Favorite example of someone you have helped by being a Beachbody coach?
I am in the process of helping my dad lose weight.  I had always seen pictures of transformations with the use of Shakeology and when my dad had a hard time getting off the floor on New Year’s Eve, I knew I had to do something.  My dad is 61 years old, and weighed 330lbs on 12/31/12.  I point blank told him, “Dad, I want you around.  Will you follow a meal plan if I put it together.  We are gonna change your lifestyle”.  He agreed, bought Shakeology and has been following the plan.  To date, he has lost over 45lbs.  We will be instituting some band exercises soon and he will be riding his mountain bike when warmer weather breaks.  This is the first time he has stuck with something and been happy and NOT hungry all time.

If you want to talk with Heather about fitness and training, you can find her at the site below:
https://www.facebook.com/WWforyou